There’s a good story in a recent edition of the Independent that discusses Ashcroft International Business School’s new campus building in Cambridge (which just opened this month,) and why it’s important for new students starting there in September.

Significantly, the new building, the design of which is based on smaller lecture locations and more informal spaces, emphasizes an increased shift to dispersed group learning. Steven Wilson, the school’s head of learning and teaching development, told the Independent that the new addition is representative of a larger change in teaching philosophy, and that:

“These days, there is far more emphasis on team working and individual project work. Students told us they wanted a large area set aside for collaborative working where they wouldn’t need to worry about disturbing others. It’s all about getting the best out of the available space.”

Indeed, recently, a number of business schools have been changing up their campuses and adding new buildings to replace old ones. What’s interesting is that beyond the whiz-bang of added new technology (of which there is plenty,) many of the new designs are reflecting shifting philosophies, not just in how business is taught, but how it is conducted in the real world.

For example, Wharton has recently announced plans to open a new San Francisco campus, which hosts its MBA for Exeuctive program. The new location will be geared towards team-based, distributed learning, with group study work rooms and HD streaming capabilities. With this new facility, students attending the program will be able to use the HD feeds, along with their Wharton-provided iPads to work together with students at Wharton’s main Philadelphia campus, or anywhere around the world. 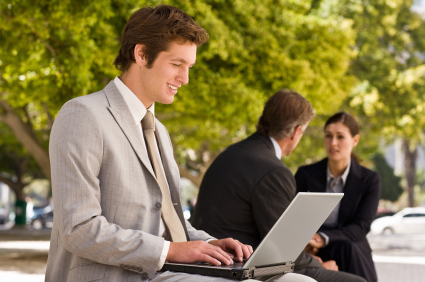 Likewise, Stanford’s new Knight Management Center, which opened earlier this year, reflects the school’s commitment to fostering teamwork and group learning. According to Stanford’s website, the new building contains 70 small classrooms (more than double the number in their previous location,) which allow students to gather in small groups to collaborate. The building also contains a wealth of technology enhancements, including electronic whiteboards and video conferencing capabilities throughout. Importantly, the new building also takes advantage of the California weather, offering a variety of outdoor settings for more impromptu meetings.

And finally, UC Berkeley’s Haas School of Business has made transforming the school’s campus a priority as part of its strategic plan to develop leaders who can redefine how to do business. According to the school’s website, the shift can be seen in Haas’ strategic use of courtyard and other public spaces as a “super-collider” for interdisciplinary collaboration.

For more on Haas’ forward-thinking plan, see this video, where Dean Rich Lyons explains some new improvements (including the courtyard,) as well as the importance of learning outside the classroom: