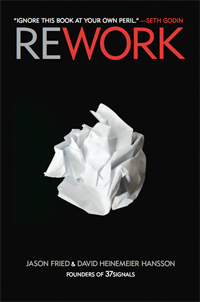 Rework is a short, punchy business manifesto written by the founders of the Chicago software company, 37signals. It’s the kind of book you can breeze through in an afternoon, which is perhaps one reason why it climbed the New York Times bestseller list earlier this year.

Another reason, no doubt, is the book’s simplicity. The authors set out to make a few dozen points – lessons learned while building a company over the last decade. Like with many other popular business books, some of the points will border on truism (“Embrace constraints”, “Meetings are toxic”) for the Generation X and Y reader.

Luckily, however, most points laid out in Rework are provocative – not the kind of things you’ll usually find on hardcover dust jackets in the business section; things like “Emulate drug dealers” “Learning from mistakes is overrated;” and “Good enough is fine.”

But once it grabs your attention, Rework generally rings true. Each point is backed up by one or two pages of short, amusing, and mostly convincing arguments. It reads like casual advice over a few after-hours drinks, which gives the book a refreshing tone.

And when real-life examples are thrown in, they’re more often references to Vinnie’s Sub Shop and Eddie Van Halen than the poster children of entrepreneurial success (Apple, Starbucks, Google…). A divergence from the Shrine of Steve Jobs – ah, that’s refreshing, too.

Rework is a tough book to boil down to just a few takeaways for current or aspiring entrepreneurs (the authors prefer the term “starters”), who seem a main target audience here. Somehow the whole book seems essential. Rather than laying out a cohesive formula for success (à la late-night infomercials), the authors set out in their introduction to prove wrong the “critics” who suggest that success hinges on boardroom meetings, PR firms, and constant growth.

No, the book is at its most compelling when it encourages us – despite the speed, info overload, and one-upsmanship of the Information Age – to keep things simple, not be such a workaholic, share our knowledge like a TV chef, and not to fret too much about what our competitors are doing.

Inspiring stuff, but not in that usual “yes-we-can” kind of way.