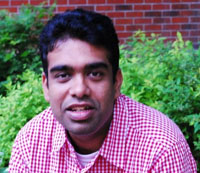 Why an MBA in Canada? We asked Biswajit Das,  who in 2007 received his MBA from the Queen’s University in Ontario.

Why did you choose an MBA program in Canada?

I was looking for an MBA program that would compliment my science and technology background, provide me a sound understanding of business and help me attain my goals. From the economic point of view, I was looking for an education that would be for a year (and not a two-year program). I checked the U.S. B-Schools and the good ones were all two-year programs. There were European schools but they were expensive. Moreover, I wanted an MBA from a North American School. I had admission to some of the best Indian B-Schools but I am of the belief that I wanted to be a global manager in the flat world –someone who has the ability to accept and deal with diversity in the word. Canada is one of the most diverse countries in the world and became my obvious choice

Was there anything about Canada or the program itself that took you by surprise?

The program exceeded my expectations. At India, with so much of population, I was always a “number”. Here, with a fewer number of students in the class, I had more personalized attention and care.  Also, being a one-year program – I always had to be on toes. It was like doing MBA through a fire hose. Come December, the winter in Canada was something that surprised me! I also found a lot of diversity in Canada, especially Toronto.

What have you been doing since graduating?

I finished my MBA in 2007 and joined a premier management consultancy firm. Over the years, I have strategized, executed and managed projects of various kinds and sizes for companies ranging from Fortune 500 to start ups in different industry segments including telecommunications, automobile, aerospace, electronics, software and pharmaceuticals. I have got to work in India, USA and Middle East and I think an MBA from Queen’s has helped me get where I am today.

Would you recommend this experience to other students from India?

Certainly! As I mentioned earlier – the world is getting flatter and one has to become a global manager – work with folks from other parts of the world and identify patterns and accept different points of view. A country such as Canada and a program like Queen’s certainly gets you ready for that. I share my experiences with folks who have done their MBA in India and I know what they have missed!