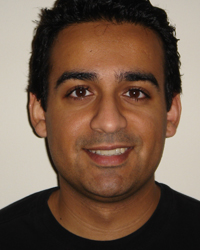 If you’re interested in “clean tech” or any other emerging sector, it’s important where you go to business school. Second-year MBA student (and now fresh graduate) Naveen Sikka tells why UC Berkeley Haas and the San Francisco Bay Area were perfect stepping stones into the green energy sector.

I actually come from a very untraditional undergraduate background. I went to Columbia University and graduated in 2000 with a degree in political science and French. At the time, the economy was really hot, so I just moved into consulting. I did that for seven years before coming here.

I got really interested in green tech right before I came to Haas. I did a finance project in energy and really took to it. Clean tech is the confluence of a lot of different forces. You see a lot of people who maybe aren’t energy people coming into this space, because it combines basic technology with policy, geopolitics, climate change, human dimensions. I knew that Berkeley would be a good place to study this, but I didn’t really appreciate fully the magnitude of that decision until I got here.

What exactly didn’t you appreciate?

I probably didn’t appreciate the importance of geography as much as I do now. For all that’s going on in clean tech, it’s still a really early space. For MBA, the traditional recruiting lines just don’t exist. A lot of MBAs will go into consulting or investment banking; it just doesn’t work like that in clean tech. You have to build relationships. You have to meet people, and have them feel comfortable with you before you can do things with them. That’s more difficult if you’re anywhere else besides the Bay Area.

Also, because California is on the cutting edge of climate legislation. The utilities like PG&E are headquartered here. Chevron is right up the road. You’ve got the California Public Utilities Commission. You’ve got Sacramento an hour away. And you’ve got Berkeley, which is in the top three in every single graduate science discipline. It also has a great law school and public policy school and school of public health that all have students that are working on these things.

You’d be hard-pressed to find a better business school than Haas right now for this. In five or ten years, it might be different because it’s getting more spread out, and companies won’t be afraid to go to Wharton to hire people for the summer, but right now, no way. Obviously, Stanford is just like Berkeley, with huge relationship lines into the community.

How did your interest in green tech influence the way you chose a business school?

I don’t know if you’ll agree with me here, but it’s not such a good idea to pick a business school on the basis of functional knowledge. All of the business schools are going to teach you functions: finance, marketing, strategy, operations, organizational behavior – they’re part of every business school curriculum.

I think what distinguishes some business schools from others is industry expertise. That is undeniable. Haas is pretty strong in clean tech. Tuck is known to be a great feeder for consulting. Everyone refers to Kellogg as a great school for consumer products, because of the breadth of consumer economies in the Midwest.

Forty percent of your curriculum at business school is dictated for you. What really counts is the industry-specializing classes. So, if you’re at Haas, we have a few differentiating energy courses. One is Energy and Environmental Markets course that’s taught by a rotation of professors. All three of them are really strong; one is arguably one of the country’s leading energy economists.

We have a department here on campus that is known as the Energy and Resources Group, which is taught by a professor with, again, a national reputation. His course is interdisciplinary, and grad students across the university take it. It’s very hard. It teaches you not just about the politics and economics of energy, but it also deals with things like thermodynamics and very basic, but sometimes difficult calculations on thermal efficiency that help you intuitively understand the space.

About ten of us (Haas students) took that class, and we really felt like we learned so much by getting a little bit dirty with numbers and equations. But you have to. A lot of the companies out there are developing complicated technologies that are really trying to be game changers, so as business school students, you better be bringing some of that competence to the table.

Are you thinking of staying in the Bay Area?

I am. I am attracted by the winning technology. My strategy right now is to try to work on projects with people that I think are going to lay down smart bets. I’m doing a project right now with an investment company called Kleiner Perkins. They are known for laying down good bets in technology, and I’d like to think they are making smart bets on energy. I’m trying to figure out where are these guys looking to invest. My goal is to join a company that smart investors are investing in. We’ll see how that goes.

For someone interested in pursuing an MBA and then a career in green energy, what is a good way to choose a business school?

There’s an issue about the reputation of a school, and an issue about what the school is definitely producing. Let’s throw the example of Harvard out there – say, Harvard versus Berkeley for energy. The “pros” of Berkeley would be that you’re here geographically, probably have a better sciences and research division, and the “California factor” where the job market is being propelled by legislative initiatives.

On the other hand, at Harvard, you might not have that same thing in the Massachusetts region, but you have the strength, depth, and breadth of that Harvard brand, network, and education that can easily lead to a job. You just have to be more active on it if you’re at Harvard. Over time, I think that balance will shift into the favor of a school like Harvard, as recruiters move into this space in a more efficient and normal manner.

I guess I would say that any old MBA program will prepare you to be an active participant in this space, but if you really know that this is what you want to do, I would strongly recommend coming to a school where you are going to have the geographic strength. If you’re an oil & gas person, you should go to business school in Texas. That’s where you network for those jobs. If you want to be a marketing person or work for a bank, go anywhere. Go to the best place you get into. But for emerging sectors like clean tech, you should consider the location.

You were one of the coordinators of the Berkeley Energy & Resources Collaborative (BERC). What is this group all about?

Three years ago, a group of Haas students got together and realized that they were a part of the campus where all this was going on, but there wasn’t really any connective tissue. I think there are over twenty department centers, departments, etc. that are doing energy-related research. They said, well, let’s create a pan-graduate student club – like a social club for all the students working in this sector.

Now this club has developed a life of it’s own. It started with socializing and networking, and moved into speaker events, and now it’s become a pretty big deal. We just had the third annual UC Berkeley Energy Symposium, which was a conference with 700 people. It’s entirely student-organized. Half the participants aren’t even students.

Now we’re moving beyond things like passive speaker events, and doing active engagements. So we’ve launched a program called Clean Tech 2 Market where interdisciplinary teams of graduate students work together on a project up at Lawrence Berkeley Lab, specifically looking at a lab technology and whether it can be commercialized.

One of the problems at the lab is that you have all these scientists working on things, and they don’t have enough lab resources to evaluate is there enough money in this thing. It’s a great symbiosis and a huge success. People ask how are you preparing yourselves to be the next generation of energy leaders? That’s the perfect example, right there.