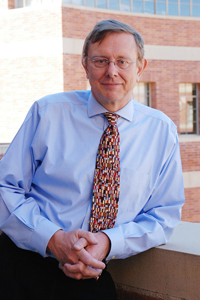 Location, location, location – it also matters for MBA students looking to focus on marketing. We spoke with Dominique Hanssens, who chairs the marketing faculty at the UCLA Anderson School of Management, about what makes a good program, and why the West Coast might have its finger on the pulse of future trends.

There’s not a one-to-one overlap, that is true. There are many places that have good marketing teaching, but not that many that have a state-of-the-art research program.  But the following generalization is true: all of the top programs are world-class in their research, but not all of the world-class research programs are among the top programs at the MBA level. The reason is that there is a certain amount of inertia in reputation development.

Let me give you an example: One of the reasons why the Kellogg School at Northwestern does so well is Professor Philip Kotler. He has written some very important marketing books at a critical time in marketing’s history as a discipline, and is widely recognized for that. A lot of the MBA students from 20 or more years ago have read these books, and many of them are now in senior managerial positions. That established a reputation, a long-term effect that Kellogg is able to capitalize on.

There are some other equally strong marketing research faculties – including Columbia, Stanford and UCLA for example – that don’t have such pioneering book authors. As a result, they haven’t communicated their value proposition as effectively with the MBA audience. That’s the fundamental difference, as I see it.

So, it is kind of by chance that a faculty member will write something that resonates in the field.

Some of it is by chance in the sense that one particular faculty member – like Professor Kotler for example – wrote some important books at a critical juncture. Had he been on the faculty of, say, Berkeley as opposed to Northwestern, then maybe Berkeley would have been able to capitalize on this.

So, the school affiliation of the “pioneer professor” plays a role. When the school actively supports that professor’s work, that can lead to a long-term, strong position in the MBA market.

Now let us consider the present day. Where is the path-breaking work being done in marketing? Major changes in marketing strategy and the marketing paradigm itself are related to the information age. So, guess what: the California schools are doing very well, in part because this is where Apple, Google, Yahoo!, eBay, Facebook, Adobe and other trend setting companies are located. The leading California research schools – mainly Berkeley, Stanford and UCLA, but also the younger University of California campuses and USC – are in a good position, because we are close to the action. If I look at the work of my own faculty, we are publishing quite a few articles in the leading journals that deal with marketing in the information age.

I think so. You never really know until after the fact, but there’s a good chance this is happening because of the combination of the tremendous new information sources and the way that consumers deal with  information on the one hand, and quite frankly, the current economic downturn on the other hand. Look at the way in which the current U.S. president was elected. It would be difficult to imagine Mr. Obama in the White House without the power of the Internet. That was an absolutely critical ingredient in his success as a politician. On the economic downturn, that forces companies to think carefully about their discretionary marketing spending, but also about new opportunities to gain market share. Our MBA graduates are well prepared to tackle these challenges.

Much of the same thing applies to a lot of companies – Amazon, Apple, and many others – whose success is critically linked with their ability to communicate with customers via the Internet. As I said, a lot of the pioneering work is being done on the West Coast, and insofar as we here at UCLA see that trend and hire leading-edge faculty to educate our students in this material, that’s how we have a chance to develop a competitive edge.

The other aspect deals with the regional business environment, mainly in urban areas. If you are located in a regional market where the marketing discipline is very important, that is helpful for an MBA program. For example, the Chicago area is the headquarters of several firms that represent strong brands, including Kraft, McDonalds, Motorola and Kellogg. You benefit from the fit of faculty expertise with the companies in your area, because then they hire your students.

Right now, the Silicon Valley around San Francisco has several firms I talked about before – Intel, Google, Yahoo!, Cisco etc… These are new-age firms, if you wish, and Stanford and Berkeley have benefited from that because they offer fine MBA programs, and their graduates often seek to work in the area, because they enjoy living there.

UCLA has not had that kind of advantage in the 1980s and 1990s, but now into the 21st century, one tremendous strategic advantage we will be developing is in the recognition of the importance of the entertainment sector, and, more broadly, the so-called “creative industries”. Obviously, we’re right next to Hollywood, and this is where everything is happening in entertainment. Because entertainment content is becoming so digitized, and this digitization connects very well to the new marketing strategies I discussed earlier, we are now placing more students in that area. This is one reason why UCLA will do better as a recognized marketing program in the future.

Is the proximity of the entertainment industry a big draw for students coming to your program?

Yes, we place 15 to 20 percent of our students in that sector. The other draw is that Southern California is a very entrepreneurial economy; it is not an economy of many large corporations. We have some, but not that many. It is more the small to mid-sized companies, many of whom have an international focus. Many of our students like to combine a general management background with a strong technology focus, and of course they enjoy the independent spirit that characterizes Southern California. They work for all kinds of interesting companies and organizations.

I think if somebody is interested in marketing and wants that sort of new-age company to work for, UCLA is a very good choice. Our friends on the East Coast – the Harvards and Whartons – tend to do better with
larger, established corporations, like General Electric. We place some students there, but we place more students in smaller, entrepreneurial firms.